Main Photograph: Thomas Schoch/ Wikimedia Commons/ 2005 [1]. The Cu Chi Tunnels are underground tunnels which were created under forest terrains in South Vietnam. They are part of a larger network of tunnels stretching over 250km from Ho Chi Minh City to the borders of Cambodia [2]. Initially, the tunnels were dug by the Vietnamese Communist guerrilla troops - Viet Cong - during the Indo-China War but the network of tunnels expanded during the Vietnam War in 1960s. The guerrillas and North Vietnamese troops dug the tunnels using their bare hands. The tunnels were used for various purposes including as hideouts, a place to store food, medical supplies and weapons as well as a place to discuss strategies against the enemies and to plan traps and ambushes. The natural environment was ideal to conceal the entrances of the tunnels as well as traps and land mines. When the American military heavily relied on aerial bombings, Cu Chi Tunnels provided safe haven for the guerrillas because the tunnels were built using soil known as laterite clay, thanks to the close presence of the Saigon River, which was a source for the material [3]. During rainy seasons, the soil was very soft and therefore, guerrillas were able to dig and shape the interior pathway without extreme difficulty [4]. However, during dry seasons, the soil turned extremely hard, thereby providing stability to the tunnels. Over time, the tunnels grew to house an entire underground village and even had artillery factories, bomb shelters, hospitals, living areas and kitchens [5].


Main Photograph: Thomas Schoch/ Wikimedia Commons/ 2005 [1]. In this Learning Experience, you will learn how the use of weapons of mass destruction during wartime can have negative impacts on primary forests. You will also learn how human activities continue to threaten primary forests in the aftermaths of wars. This Learning Experience is suitable for learners Year 3 and above. Note: The reflection phase will take place under Point A.


Orientation in Time and Space Exploration into: Natural resources, human landscapes and evolution.


War and post-war periods may threaten the ecosystem of forests and cause social, economical and environmental impacts. 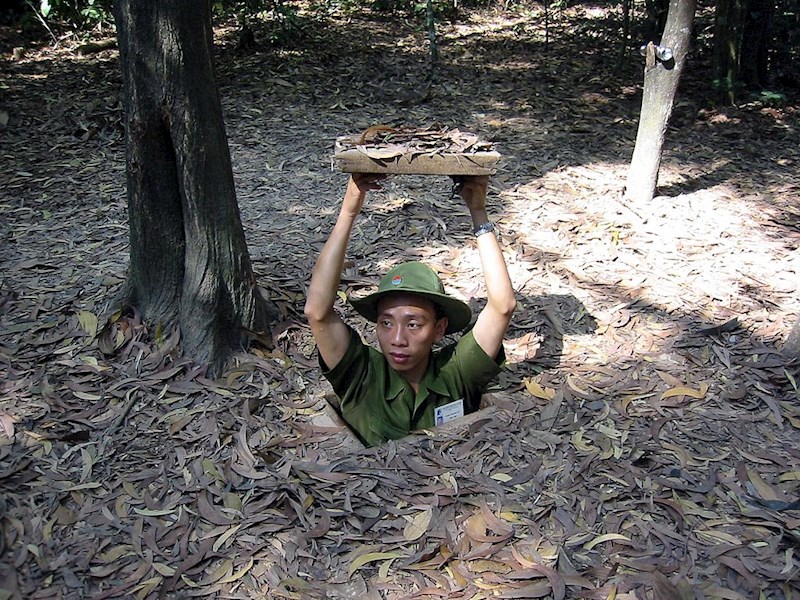